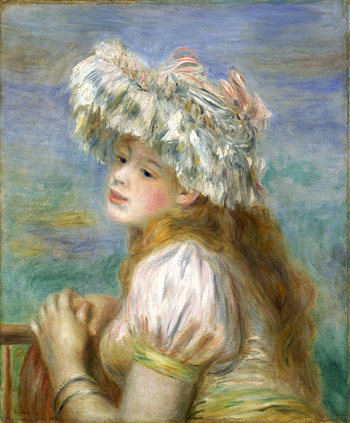 Pierre Auguste Renoir, Girl in Lace Hat, 1891
The 19th and the 20th centuries was a time that saw the most rapid changes in modern art, particularly in France. The approximately 400 works of Western modern art that lie at the heart of the Pola Museum of Art Collection were made by artists who lived during that period. Some 100 of the pieces are works by artists associated with movements such as Impressionism, Post-Impressionism, and Neo-Impressionism, while another 100 are by artists from the École de Paris, a group that was formed by non-French painters living in Paris in the 1920s. Other works range from the Neoclassical painter Jean-Auguste-Dominique Ingres and the Romantic painter Eugène Delacroix to Vassily Kandinsky, a founder of abstract painting, and the Surrealists in a collection that enables viewers to trace the entire history of modern art.

Of special note are the works by Monet, a leading figure in the Impressionist movement; Renoir, an artist who constantly strove to depict the “joy of living”; and Picasso, who exerted a decisive influence on present-day painting. These three painters were of particular interest to Tsuneshi Suzuki (1930-2000), the second-generation head of the Pola corporation, and the creator of the Pola Museum of Art collection. Another distinguishing feature of the museum is that houses the largest Japanese collections of several artists, including 19 works by Monet, 16 by Renoir, 19 by Picasso, and 176 by Léonard Foujita, nine by Degas, and three by Van Gogh. 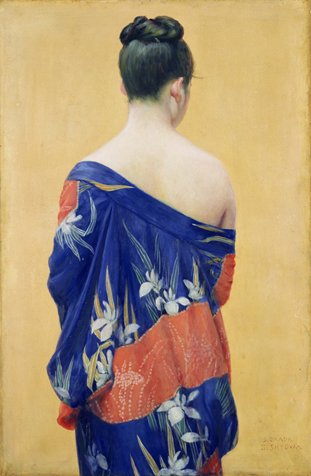 Okada Saburosuke, Kimono with Iris Pattern, 1927
Japanese Yoga (Western-style Painting)
The 1860s, a time in which French Impressionists such as Monet and Renoir were first getting their start, corresponds to the era in which the Edo Period was shifting into the Meiji Restoration in Japan. During this period, Japan endeavored to introduce modern Western civilization after the country reopened following an extended period of national seclusion. In the field of art, there were many Japanese painters who were passionately devoted to studying Western oil-painting techniques. These included Takahashi Yuichi, an early master of Western oil painting who initially made his own paints and brushes, and was almost entirely self-taught; Koyama Shotaro and Asai Chu, who studied with the Italian painter Antonio Fontanesi, an artist who had been hired to teach in Japan by the Meiji government; Kuroda Seiki and Fujishima Takeji, who moved to France to receive training in oil painting. Artists of the Taisho Period of the early 20th century, included Kishida Ryusei, known for a series of portraits of his daughter Reiko, the unconventional painter Murayama Kaita, who died prematurely, and others such as Umehara Ryuzaburo and Yasui Shotaro, who created a body of highly imaginative work stretching from before to after World War II. Here you will find a collection of masterpieces by these and many more outstanding artists, providing a history of modern European-style painting, which displays the strong influence of Western art while at the same time maintaining a traditional Japanese aesthetic.

Nihonga (Japanese-style Painting)
The Pola Museum of Art’s collection of Nihonga (Japanese-style painting) is made up of approximately 160 works, primarily from the postwar era. One of the collection’s distinguishing features is the inclusion of works by the most prominent figures from the Japanese art world, enabling viewers to trace changing trends in modern Nihonga. Another feature is a selection of artists who pioneered new approaches without adhering to conventions of previous eras. Among the most notable painters in the collection are Yokoyama Taikan, who eliminated the line drawings that had been an essential element in traditional Japanese-style painting, and heralded a new age in modern Nihonga with his morotai (obscure style), and use of Western aerial perspective. Other key figures in the collection include Kobayashi Kokei, Yasuda Yukihiko, and Maeda Seison, who launched the Neo-Classicist movement to make new paintings based on historical themes and showed their work at the Nihon Bijutsuin (Japan Academy of Fine Arts) exhibition, which was revived in 1914. There are also artists like Sugiyama Yasushi, Takayama Tatsuo, and Yamamoto Kyujin, who formed the Rusogasha group with the intent of creating a new type of Nihonga and breaking away from the traditional Yamato-e style, which concentrated on historical and genre paintings. Of special note are the 43 works by Sugiyama Yasushi, constituting one of the largest collections of the artist’s works in Japan. 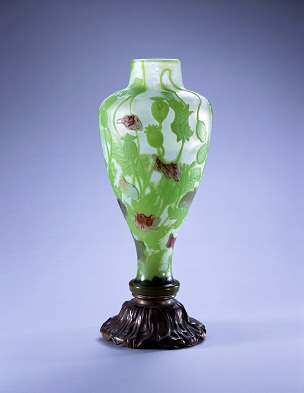 Emile Gallé, Vase with Poppy Design, ca.1900
Glass Works
The Pola Museum of Art includes a total of 790 glass works, the majority of which date from the Art Nouveau and Art Deco era. Of special note are works by two artists who personify these movements, Émile Gallé, who created numerous works based on natural motifs, such as fauna and flora, and are distinguished by their organic forms; and René Lalique, who enjoyed tremendous popularity for works with decorous shaping and geometric structure. In addition, through works by the brothers Antonin and Auguste Daum, Louis Comfort Tiffany, and Victor Amalric Walter, viewers can enjoy a historical overview of compelling glass art, which flourished between the late 19th and early 20th century.

Eastern Ceramics
The Pola Museum of Art’s collection of Eastern ceramics centers on ancient pottery and porcelain from China, Korea, and Japan. At the heart of the approximately 200 works is a fine selection of Chinese ceramics from every period from the Han (206 BCE to 220 CE) to the Qing dynasty (1644 to 1912). Of special note are stunning works of Kangxi wucai-style porcelain decorated with five-colored pictures from the Ming (1368-1644) and Qing eras, exemplifying the opulent yet calm beauty that underlies the museum collection. Other highlights include an assemblage of excellent Korean Goryeo ware as well as Japanese Kokutani and Kakiemon ware, two varieties of Hizen porcelain that are decorated with colored pictures.

Cosmetic Utensils
The museum’s collection of 6,700 cosmetic utensils, one of the rarest in the world, stretches from ancient to contemporary times, and while focusing on Japan and Europe, it also included items from regions such as Africa and Oceania. Here you will find a truly diverse range of pieces, including English and French cosmetic sets and perfume bottles from the 18th and 19th century, and compacts and face-powder cases, which emerged in the 20th century. In addition to the artisanal beauty of the works, the pieces reflect cosmetic customs and aesthetics of both the East and the West, and are also striking for their artistic patterns, practical uses, and historical and social background.
ABOUT THE MUSEUM
GENERAL INFORMATION
EXHIBITION
NATURE/ARCHITECTURE
NEWS
RESTAURANT/SHOP
COLLECTION
ABOUT THE MUSEUM
GENERAL INFORMATION
EXHIBITION
NATURE/ARCHITECTURE
NEWS
RESTAURANT/SHOP
COLLECTION